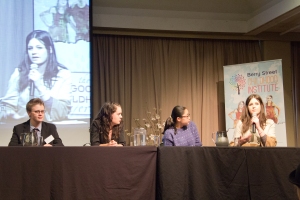 Day 1 of the Good Childhood Conference 2013 wrapped with a youth panel consisting of four young people, all of whom work actively in areas relating to youth affairs and leadership. Facilitated by UN Youth Representative 2012, Dan Ryan, the panelists discussed issues related to modern childhoods from their own experiences and work, and answered various questions posed by Dan and the audience. The panel was made up of:

The panelists spoke eloquently and honestly about their interests, passions and opinions regarding topics facing youth today:

There was united consensus among the panel on the notion of treating young people as equals and a strong belief in the idea that anyone is able to change the world.

Connect with the organisations or young people on Twitter: