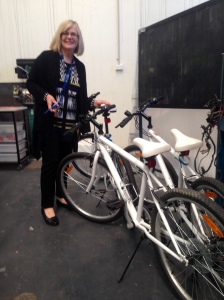 Many of the children and young people that Berry Street help aren’t told by their parents to get up and go to school every morning. The abuse, neglect and instability these children deal with daily means that going to school is not on top of their to-do list.

This is why Berry Street runs an independent school (with three campuses) for children who have been disengaged from mainstream education.

The teachers at these schools do their best to get their students involved in school and receive the education and future they deserve. They try to make school-life more engaging for the students in a variety of creative ways, such as a recent bike-building activity.

The students at the Noble Park campus were given the opportunity to build their own bikes through The Happiness Cycle. This is an initiative run by Coca Cola to provide teenagers with bikes to make them more active.

Principal of the Noble Park School, Susan Nilson, says the students responded well to the program.

“It was a really positive experience for the kids. It was a good hands-on activity,” Nilson says. “It enabled the kids to feel valued because they were given the opportunity and responsibility to build something that they get to keep. It gave them a sense of purpose and accomplishment.”

Nilson says the students got really involved and enjoyed the day. Harry*, 16, was excited by the idea of building his own bike.

“The main reason I chose to do the program was to get a bike. That’s pretty cool!” Harry says. Being involved in an activity like this and receiving a bike isn’t something the students would normally experience given their backgrounds, but Harry says getting the bike wasn’t the only positive.

“It was a worthwhile experience. Apart from getting a bike, we got to be around a different variety of people, which was interesting,” Harry says. “It was good because we got to spend time with our friends in a different environment.”

Expert teacher, Travis McMahon, attended the activity and says the students put a lot of effort into building their bikes, as well as acting appropriately, which at times can be a challenge for them.

“The kids were really good. If someone needed a hand with their bike, they’d jump in and help. It was really collaborative,” McMahon says. “These are young people who don’t usually deal well in social settings, but they dealt with being around all the other people really well.”

Like the other students, Harry experienced a difficult upbringing, resulting in him being asked to leave mainstream education. He’s been attending the Berry Street School for a year now and says he’s happy to be there.

“I’ve made a lot of friends here, which is good, and I can get an education. That’s very important to me.”

*Names have been changed to protect the identities of students.